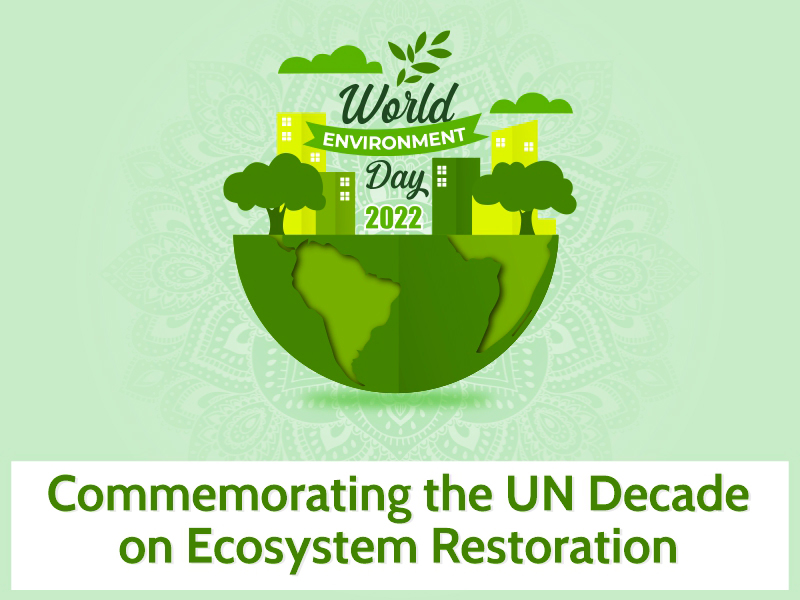 On June 5, 2021, the United Nations Decade on Ecosystem Restoration (2021-2030) was formally launched, a decade in which attempts to significantly scale up the restoration of degraded and destroyed ecosystems will be made. Given the alarming revelations of ground-breaking scientific findings on the status of our biosphere, the declaration of 2021-2030 as the UN Decade on Ecosystem Restoration is both strategic and optimistic. It indicates that the decade is critical for preventing catastrophic climate change and reversing the biodiversity loss curve, without which an estimated 1 million species might become extinct, many within decades.

The UN hopes to inspire a worldwide movement, a generation for restoration, as the window for action in slowing and reversing the trends of biodiversity loss and environmental degradation. Ecosystems are a source of wealth for society as long as they are not degraded. Environment services, or the myriad benefits that humans and other life forms enjoy from a well-functioning ecosystem, are provided by healthy ecosystems, whether they be forests, rivers and lakes, oceans and coasts, mountains, grasslands and peatlands, farmlands and urban landscapes.

According to a recent study published in Nature, restoring up to 15% of land in priority areas might prevent 60% of anticipated biodiversity extinctions and reduce roughly a third of the additional carbon dioxide put into the atmosphere. Many of the current crises such as the pandemic, the climate, and the extinction crises, could have been avoided to a significant amount if we had invested proactively in the sustainable use and management of our ecosystem.

Scaling up Ecosystem Restoration in India

Scaling up ecosystem restoration initiatives is vital for India because it is one of the world’s mega biodiverse countries. With around 48,000 plant species and over 100,000 animal species, India is home to nearly 8% of all known species. However, while occupying only 2.4 percent of the world’s land area, India hosts about 18 percent of the world’s human population and about 15 percent of the world’s livestock. According to the United Nations Environment Programme, for every $1 spent on restoration, at least $9 in economic benefits can be expected. Scaling up ecosystem restoration will address the complex and wide-ranging challenges in India, including biodiversity, climate, livelihoods, and food security, given that nearly 30% of the country’s land area, or 96.4 million hectares, is degraded.

Everybody Needs to Act

The lack of public awareness of the negative effects of ecosystem degradation is one of the major obstacles to scaling restoration that has been identified by the UN Program. Individuals can help restore ecosystems by making proper lifestyle choices toward sustainable consumption and promoting public awareness about their value.

To participate and achieve restoration at scale, a diverse range of stakeholders is required, including civil society, academic institutions, indigenous communities, farmer’s groups, and other marginalized communities. Individual actions are crucial and can include rainwater harvesting, waste segregation at the source, recycling, planting trees and encouraging native species plantations, developing and maintaining green spaces, and choosing nature-inspired housing and energy-efficient solutions. And to channelize the required actions at the individual level, the internalization of ecosystem service costs in the pricing of goods and services is most urgent. The carbon market initiative is designed to address the inclusion of the cost of carbon into financial valuations; similar systems should be planned to include other ecosystem services. This may be the most reasonable way to moderate the growth-centric development vicious cycle towards real sustainability.

Through the United Nations Decade on Ecosystem Restoration, we are not only attempting to restore nature’s balance, but also our livelihood opportunities, health, and quality of life.