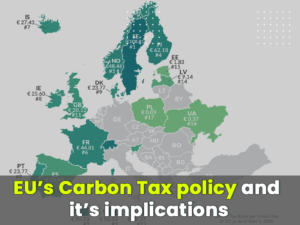 Global warming has been a serious concern for more than four decades now. With the Kyoto protocol guidelines, the entire world has now came together to arrest climate change by reducing GHG (greenhouse gases) emissions.

To attain net zero transmission, developed nations and developing nations have mutually agreed upon the pact to improve on multiple facets of productions and trade. In order to limit the emissions, the United Nations had decided to set a cap-and-trade policy for each industry that allows them to emit a specific amount of GHG and ‘buy’ carbon credits from those who are emitting lesser than the set standards. Consequently, developed nations like the member states of EU which have been amongst the pioneers in setting up a mechanism that encourage importers to either increase their production efficiencies or pay an extra ‘price’ by buying carbon credits for their emissions. This will increase the cost of the product and works as an added strategic resoultion for climate action as high price points of such products will reduce its consumption in the long run. EU recently announced its carbon tax policy and is planning to implement the penalty with effect 2026.

Developing nations are yet to follow the cap-and-trade policy for restricting carbon emission and hence they own the leverage to produce without any environmental risk. If importers can reduce their emissions by adopting green manufacturing solutions, consequently, imports from developing nations will cost much lesser than a product manufactured in EU.

Importing goods which have been produced from processes leading to higher emission leads to a phenomenon called carbon leakage. Carbon leakage will affect the potential of the domestic producers to sell in their own markets because of higher cost involved in buying carbon credits. Though the domestic producers in EU get some leeway in terms of free carbon limits as per the industry and production capacity, these limits fall short in comparison to the overall carbon emitted. EU is planning to levy carbon tax on imported products in order to provide an optimum level of competition.

Firms across the globe, especially in developing and developed countries will be most hit with the implementation of the new carbon tax by EU, as every firm strives to reduce its costs and increase its profitability but carbon tax will be an additional cost that they will have to cough up.

These curbs and mechanisms will improve the carbon efficiency slowly and steadily across the globe but shall have immediate impacts in demand and supply patterns. ESG (environmental, social and governance) goals will be met through these steps gradually but this may harm the economic growth of exporting countries in the short term.

Some of the key changes that are anticipated will be:

Some of objectives of UN will also be attained with this move: