During the past couple of years, the world has done its bit in acknowledging anthropogenic climate change and taking pledges – from the frenzy of public announcements at COP26 to companies around the world turning their attention to a net-zero future. But now, it is the time to take real and urgent action beyond pledges.

It is now critically important to increase the speed and scale of global climate action to steer the planet towards a net zero future. COP27 is a pivotal moment on this journey – to realize the goals of the Paris Agreement and how to do it.

It’s time to take action and make an impact, for a serious 1.50C target

As stated by UN Secretary-General António Guterres, “unless action is taken now, unless funds are disbursed now, these tragedies will simply multiply, with devastating consequences for years to come. So, lower the temperature – now.”

As evident from the Emission Gap Report 2022 of UNEP, with insufficiency of the present NDCs to the tune of 23 Gt from 1.50C pathway, and even with conditional NDC, the world is on the pathway to more than 2.40C warming. Further to highlight that the implementation gap of already taken NDC commitments is to the tune of 6 Gt by 2030!

The focus of this year’s COP is effective actions and finance to support these actions.  With its strapline, “Together for implementation”, COP27 will be more about the implementation and execution of previous negotiations which includes Article 6 and global targets rather than seeking new negotiations.

At the COP27 climate conference in Egypt, all eyes will be on world leaders to agree on how to implement the Paris Agreement in very practical terms.

COP27 will take place in Sharm El-Sheikh, Egypt during 6-18 November 2022. The Egyptian COP27 Presidency has identified a range of topics and further designated several thematic days for focused discussions. 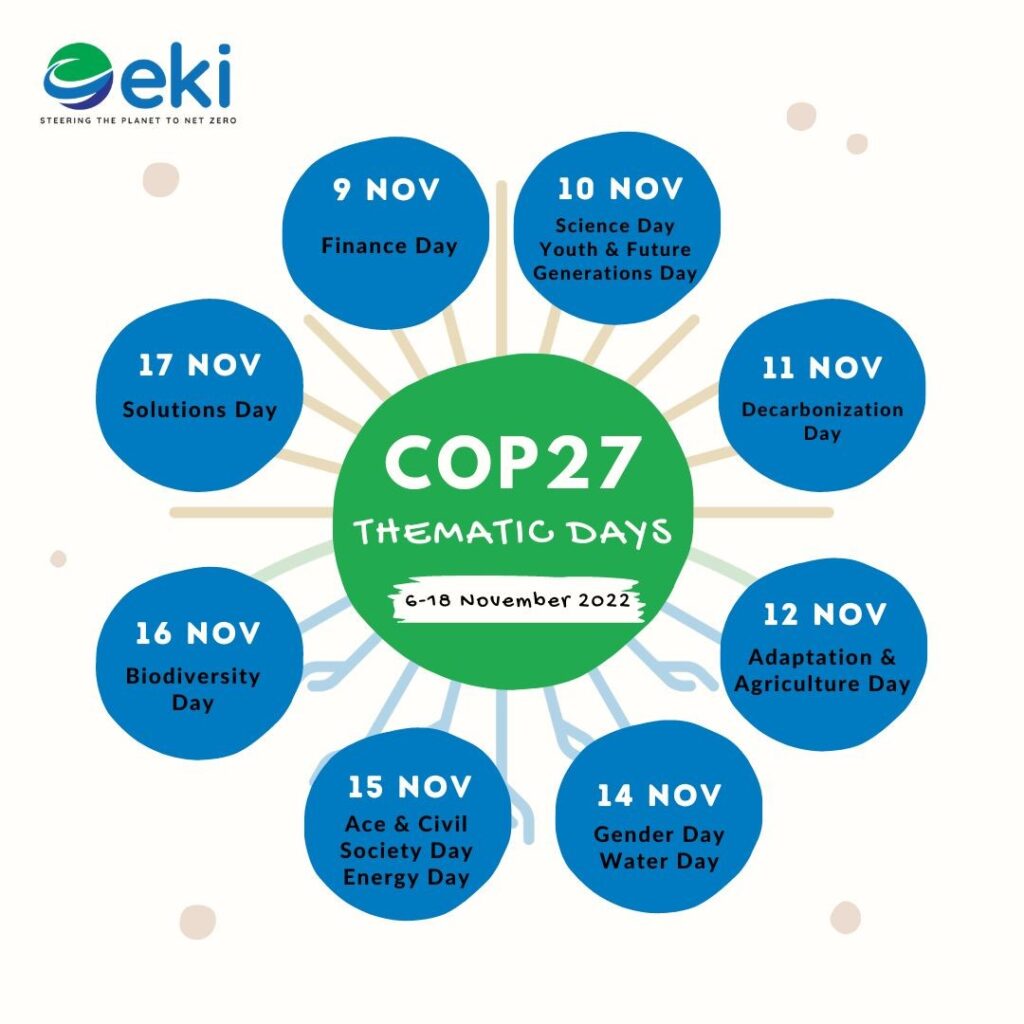 Why is COP27 important?

COP 27 will be a critical test for how countries plan to respond to the increasing urgency of climate action and keep warming below 1.5 degrees.

According to the world’s leading scientific authority, the Intergovernmental Panel on Climate Change (IPCC), global emissions must halve by 2030 and reach net zero by 2050 to limit warming to 1.5 degrees.

At COP26 in Glasgow last year, countries from across the globe set some ambitious goals; now is the time for world leaders to figure out an action plan to achieve these goals.

This year, at COP27, all eyes will be on world leaders to direct finance, as committed earlier, to help rapidly developing economies leapfrog towards carbon-neutral development pathways and vulnerable countries to enhance adaptive capacity against changing climate. It is expected that there will be a predominant focus on directing climate funding which was promised to be $100 billion but is currently around 20%. 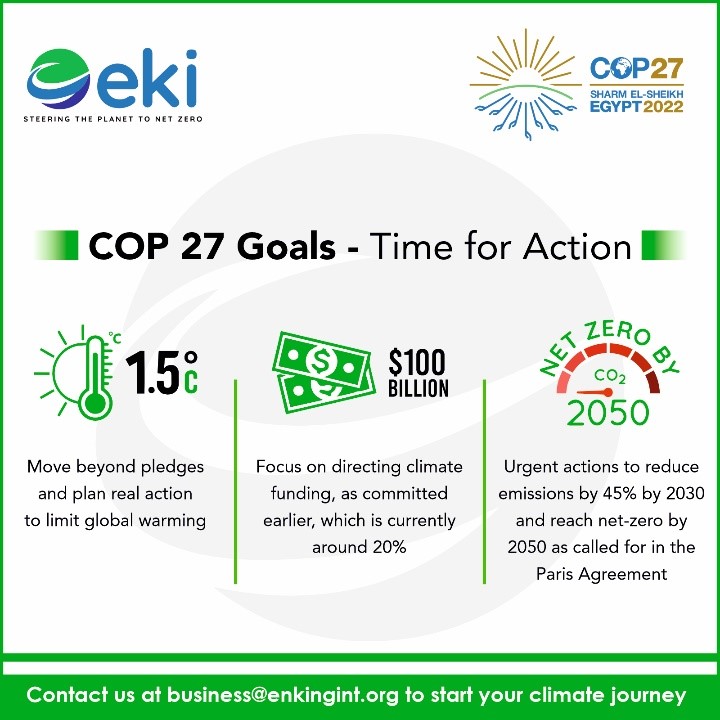 Further, many nations have already included Nature-based Solutions (NbS) as part of their national climate action plans. However, developing countries and local communities require increased financial support to implement and execute such activities.

The Executive Director of the United Nations Environment Programme, Inger Andersen, quotes, “Only about 133 billion dollars are channeled into Nature-based Solutions, and investments must triple by 2030 to meet the climate, the nature and land-neutrality targets.”

At COP27, it will be interesting to see what decisions world leaders make to direct finance towards NbS.

Climate change is disproportionately harming developing economies that have contributed very few greenhouse gas emissions that cause climate change as compared to the wealthier economies. In this regard, the UN proposed that developed or wealthier countries should pay “loss and damage” funds to developing countries to compensate for the harm and to finance new adaptation efforts. Now is the time to bring back the very important ‘Loss and Damage’ issues onto the table with funds and timeline commitments.

Our team of climate experts will be attending COP27 and closely following discussions as we strongly focus on steering the planet towards net zero. You can meet our delegates to start your climate journey and achieve your climate neutrality goals. Write to us at business@enkingint.org for more details.